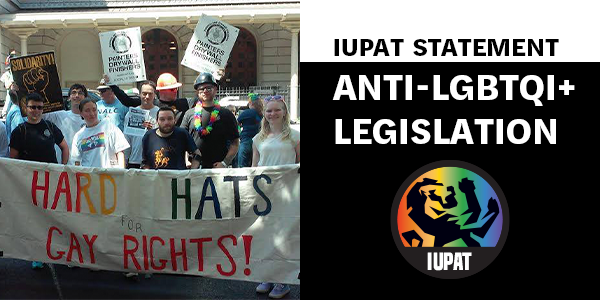 International Union of Painters and Allied Trades General President Jimmy Williams, Jr. issued the following statement regarding the wave of anti-LGBTQI+ legislation across the country:

“Around the country, working people are at risk of losing their right to be who they are. In the last year, hundreds of bills have been introduced in state legislatures across the country, most notably in Florida and Texas.

One of my first actions as General President was creating an LGBTQI+ constituency committee – this committee is composed of LGBTQI+ identifying rank and file and staff within our union to give a voice and a priority to issues affecting them throughout all levels of our union. We cannot hope to fight for non-union LGBTQI+ workers if we do not first take our own members’ concerns with the utmost sincerity.

Florida Governor Ron DeSantis’ signing of the ‘Don’t Say Gay’ bill is an enormous injustice to all workers within his state, including IUPAT members. This bill should have never passed the legislature and certainly never signed into law. The labor movement cannot sit silent while politicians in state legislatures and in the U.S. Capitol attack people’s fundamental rights to respect, dignity, and happiness. The IUPAT wants to make sure our LGBTQI+ sisters, brothers, and siblings know that we have their back. Hate has no home in our union and we will always support you.”

“Words matter, inclusion matters, not just hearing from our General President, but hearing support in our Locals, job sites, and from community leaders. As the Chair for the LGBTQI+ Committee, we want our members to know we will always be here for them. As our Committee’s mission statement says: the LGBTQI+ Committees goal is to promote justice and equity, end oppression and inequities, and ensure that all voices in the community have representation within our Union.”